I grew up in a small town of 10,000 people called Fulton, Missouri, USA, in the 1980s. While the area was generally rural, Fulton was unusually rich in culture. It has two colleges, the state school for the deaf, a state prison, a significant connection to history (e.g., Winston Churchill’s Iron Curtain speech, a sculpture made from eight sections of the Berlin Wall), lots of farmers, academics, scientists and working class families. Fulton stands as the seat of Callaway County, which seceded from both the North and South and technically has never rejoined the United States. To this day people still refer to it as the “Kingdom of Callaway”.

Yet even with all that diversity of thought and experience, it is still populated— overwhelmingly—by people with lightly melanated skin (a.k.a. white people).

My indoctrination into American culture came early, as it does for most natural-born citizens. One form that it took was reciting the Pledge of Allegiance in grade school—my fellow students and I reflexively chanting in unison while staring at the American flag with our hands over our hearts. I distinctly remember saying, “One nation under God,” which always struck me as a bit odd since I was taught that church and state in our country are supposed to be separate. 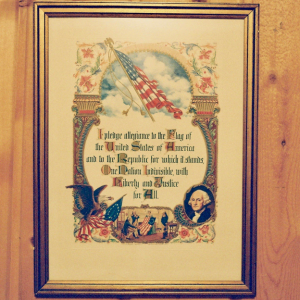 On a trip to Colorado with my family many years ago, I encountered this piece of art in a cabin depicting the original Pledge, and I was surprised to see that “under God” was not included. It turns out that President Eisenhower encouraged Congress to add those words in 1954 in response to the perceived Communist threat of the times. It’s also worth noting that the original author, Francis Bellamy, had hoped that the Pledge would be used by citizens in any country when he penned it in 1892.

It’s important to have a shared cultural fabric, so why not a country’s flag? (We’ll save the perils of nationalism for another day.) The closing words of the Pledge are especially interesting to me in these times: “Indivisible, with liberty and justice for all.”

On the other hand, the history and legacy of this American flag is riddled with contradictions and cover-ups about our country’s true origins. Most of these are strategically and intentionally edited out of our schools’ history books—forcing truth seekers like me to dig deeper.

The 2020 election revealed a deeply divided country. Despite the record number of votes cast for each presidential candidate, I am troubled by those who believe violence is justified against the other side.

“Among Americans who identify as Democrat or Republican, 1 in 3 now believe that violence could be justified to advance their parties’ political goals—a substantial increase over the last three years.” (Politico, Oct 1, 2020)

This statement alarms me. I believe a healthy tension should exist, where people speak their minds freely and respectfully to forge a path to a greater shared future—not where we reduce each person to their political identity to dehumanize them and invalidate their existence. I believe the very soul of America is at stake.

For me, the soul of America reflects an ideal that we have yet to reach—one where “for all” truly means all human beings in America regardless of identity, status, or background.

“Somehow we've weathered and witnessed a nation that isn't broken but simply unfinished.”

—Amanda Gorman, ‘The Hill We Climb’

Let’s be clear—the founding documents of this nation explicitly did not include all human beings in its doctrines of freedom and justice, which were primarily motivated by economics. Enslaved people were legally diminished to just 3/5s of a person (without voting rights) and women weren’t factored in at all. As United States history bears witness, maleness has consistently taken precedence over race and femaleness when it comes to rights.

So how do we reconcile this historical record of inequality with the yet unreached ideal of “for all”?

How do we move past the temptation to believe the “PR story” that America is the greatest nation of all, and instead focus our collective energy on working toward this ideal?

I believe this question is at the heart of the current political divide. Some of us who push toward a future ideal speak from a place of entitlement, as though everyone must agree that America always intended to be marching toward this ideal.

Those who push back against movement toward that ideal—whether by pretending it already exists or denying its right to exist—still have a stake in this argument because they are also part of America.

I could cite numerous examples to prove that we have not yet met this ideal, but I’ll simply point to one: We have yet to pass the Equal Rights Amendment (ERA), designed to guarantee equal legal rights for all American citizens regardless of sex, which was first introduced in Congress in 1923. Nearly 100 years later, it has yet to be ratified by all states.

We all must acknowledge our shared historical reality: We are a nation of conquerors, built on stolen land by stolen labor. The question remains whether we’ll continue to celebrate that conquest or evolve beyond the attitude of the conqueror.

Where Do We Go From Here?

We have big decisions to make as a nation. Will we continue to fight for the ideal of an America that truly stands “for all”? Or will we shrink back to the deeply compromised state of our original Constitution, when well-intentioned white men threaded the needle of ideals and hypocrisy to form a new nation from a scattered string of slave-owning colonies?

We have indeed made progress toward the ideal, but each step forward bears a tremendous cost and is typically met with backlash by those who cling to America’s original roots.

In addition to what we’ve learned from our families and our selectively edited history books, our technology is also now working against our unity, with algorithms of outrage designed to feed us different versions of reality just to keep us scrolling and clicking ads. We’re each living in our own reality distortion fields and feedback loops that tell us what we want to hear rather than expanding us into new perspectives and ideas.

I share Martin Luther King Jr.’s dream of an America that truly stands for liberty, justice and the pursuit of happiness for ALL its people.

Tens of millions of us from all walks of life are working every day to make this dream a reality—to live into the America that some may believe already exists, where the founding principles don’t just apply to the white men who had the power to write them at the time.

“Those of us who have suffered the most have never given up on democracy.”

When I talk to people who come from other countries, many say that America offers greater possibilities than where they came from—because they believe in what America can be. Many come from countries that don’t offer the freedoms we take for granted.

But we will never reach that dream until we face the truth of our past and how it haunts us to this day. Avoidance prolongs the pain and suffering for so many and guarantees that we’ll continue to be stuck in a system that doesn’t work.

America is not serving the needs of all its people, and change is inevitable. So what will it take to create the change that will truly bring justice for all? What will it take for us to face our truth and move through it together into a more prosperous future?

To achieve collective liberation is to act from a place of consistent courage that runs deeper than anything most of us have ever experienced. It’s more of a way of being than a destination.

I yearn to live in the America that was promised to me in that Pledge of Allegiance I recited thousands of times as a child: ”One nation indivisible, with liberty and justice for all.” I’ve dedicated my life to this mission that I don’t expect to conclude in my lifetime. Will you muster your courage and join me in building it together?

Why Andy Wrote This?

Andy brings hearts together to unify humanity. He envisions a world that embraces healthy tensions to ensure dignity and agency for every person. Andy is devoted to building an equitable world by understanding and dismantling his own complicity in systems of oppression while working on transforming the systems themselves. He co-founded FeelReal to hold space for people to share our true stories and connect deeply in community to shift the dominant narrative from fear to love. To learn more about Andy’s work in unifying humanity, go to https://feelreal.net/ or https://andyswindler.com/