Moving at the “Speed of Care”: Privilege, Energy and Action

How much energy does it take for you to move through your world?

Does your energy fluctuate or remain fairly constant?

Do you feel like you have agency (choices) in how your energy is spent or does the world tend to choose for you?

A few years ago, a good friend explained why she had to make more careful choices than me about how to spend her limited energy (or spoons). For example, if I asked her to go out with some friends, she would weigh that against many factors that I wouldn't even consider. For example, how would her energy expenditure impact how she showed up for work the next day, how would it impact her physical wellbeing or how much energy might she have left to tend to her everyday needs?

I've spent the past several years in a deep interrogation of my privilege (unearned advantage) as a straight cis white man in America. It’s common for many Americans to resist the idea of having privileges because this acknowledgement often carries feelings of shame or guilt. I get it. I’ve been there!

Yet when I realized that the journey of acknowledging my privileges and how they impact other people is a lifelong commitment, I understood that wallowing in guilt and shame aren’t useful for me. Feeling bad about being born into this particular body or carrying all the burdens of my ancestors’ actions is neither useful nor healthy. But society is asking me to use what I have–including my privileges–to create a more equitable world, and I've devoted myself to that task. Perhaps more importantly, I’m not just doing it for them, I’m doing it for all of us—including me.

But it begs the common question: what can I do about it?

Privilege and Energy
My privileges (e.g., as a straight, white, cis, middle-class male) allow me to have surplus energy to spend. My privileges are protected through carefully constructed systems of violence. That means that I tend to be safer, more included, more represented in the dominant narrative and have access to more opportunities than most women and most BIPOC (black, indigenous & people of color) folks. I could easily live my life without “code-switching,” which “often comes at a great psychological cost.” (HBR) The net result is that I spend less energy worrying about my safety and prospects. I experience less friction. I also start most days with more energy because I have spent less of my life experiencing trauma than a lot of other people, and I have considerably more capacity to heal what trauma I have experienced.

To understand the complexity of how energy and identities interact, we need a concept like intersectionality, first coined 30 years ago by law professor Kimberlé Crenshaw and now the subject of much distracting controversy by those who insist on viewing humanity’s potential in our currently limited structure of a power hierarchy with one class permanently on top of another.

Those who are willing to embrace the true complexity and beautiful diversity of our society will benefit from looking at our lives as an intersection of identities. Only then can we start to understand how our energy increases or decreases based on how the world’s systems and attitudes treat these various identities that we claim or are born into. It's important not to use language that blames the identity itself (e.g., being a woman makes me less safe at night), but rather to use language that keeps the focus on the condition faced by that identity in the world (e.g., more people target women at night, which often makes the world less safe for them to navigate, and therefore more expensive energetically given how many more things they typically need to consider before leaving the house).

My favorite illustration of intersectional power, privilege & marginalization is the Wheel of Power/Privilege from Sylvia Duckworth, which you can see depicted below. Sylvia says, “Wheels like this help us visualize what the term ‘Marginalization’ means: The further you are from power, the more marginalized and powerless you are.” 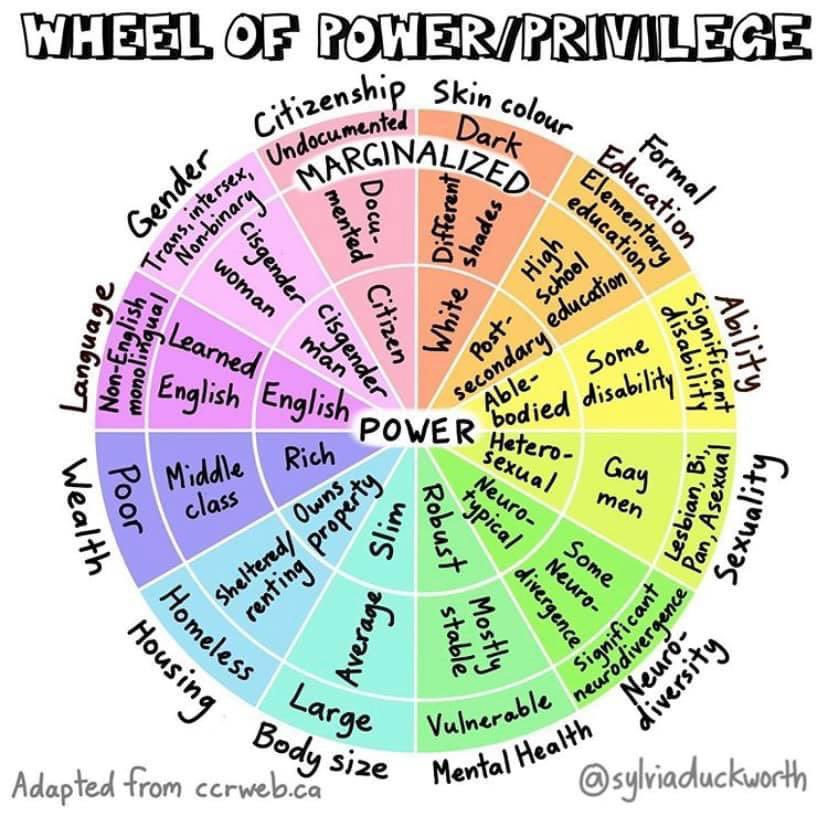 Now that we have a baseline for privilege simply being how our identities interact with the world, we can model this in the context of oppression. When we continue to build a world that doesn't take marginalized identities into account, we continue to force marginalized folks to make extremely difficult choices about how to manage their energy, often tending to their basic needs and not much else. This leaves more privileged identities with a wide open world to play in and numerous blind spots, which often leads to exploitation because not all voices are even present to be heard.

Calculating Privilege
While it’s impossible to quantify these intersections with complete accuracy, it’s helpful for me to use this model to assess my own privilege, and I invite you to try this as well. One simple way of doing this is to assign a number value (1, 2 or 3) to each ring on Duckworth’s wheel. The inner ring (power) gets the highest number of 3. The middle ring is 2. And the outer ring (marginalized) is 1.

I occupy 75% of the dominant power structures of identity in the inner ring. (9x3)

Then I have two dimensions in the middle ring: wealth and housing. (2x2)

Finally, as a large person I have one marginalized identity—my body size*. (1x1)

That leads to my total privilege score of 32 (out of a possible 36), which translates to low friction (only 11%) and a lot of extra energy! I deploy this “extra energy” in many ways, including this kind of writing, research and speaking about systemic marginalization. My professional life is devoted to the emotionally taxing work of holding space and pioneering new ways of being together that lead to human flourishing.

Most of my physical activity and time goes toward mutual aid and food sovereignty work in Chicago, which also leans on the privilege of having a car with gas and driver’s license (ability + citizenship + wealth). The intersections of privilege and power get murkier in this space, since we rightfully embrace BIPOC, women and LGBTQ folks as the most prominent voices, which typically translates to them having more social power in this environment.

It’s a humbling opportunity to experience these intersections first-hand and learn to adjust how I take up space and move through the world and impact other people. Through several hundred hours of work in the community, I’ve learned “to move at the speed of care”—to embody a kind of grace that considers how my energy affects the people around me. I admit sometimes I step clumsily and must seek to repair harm that I cause. This is often a messy process that ideally is guided by experienced restorative justice practitioners to reduce further harm. It’s not easy but it is rewarding. Each time I learn something about the harmful impact I can have on other people—and vice versa—I try to apply what I learn going forward.

Since no model is perfect, I’d suggest there are at least three** missing dimensions from the Duckworth model. The first is age, and as a middle-aged white man, I am in the nexus of power. The second is height, which ought to be distinguished from body size. As a six-foot-two-inch-tall white man, I am again imbued with power and status in most physical rooms (even while online interactions have a way of diminishing the importance of height).

The third missing dimension is very personal to me since it can cost me a LOT of energy if not managed. This is the dimension of energy sensitivity, or being an empath. This is a challenging concept for some people to consider, since it’s invisible and a relatively new body of work. Basically it means that I absorb energy and emotions from other people very easily—often without even trying. It’s one of the reasons I’m drawn to this work, because I can literally feel so much of people’s emotions, particularly those heighted through pain—but it can also lead to a lot of emotional labor that people often don’t assume is happening based on my other identities. Sensing all this energy is often overwhelming and led me to turn to numbing agents before I learned how to distinguish other people’s energy from my own lived experience. When managed well, energy sensitivity turns out to be a superpower for doing inclusion work, since I naturally make space for other people. When we feel seen and heard, it’s easier to trust one another.

From Surplus Energy to Care-filled Action
Whatever our privileges, identities and access to power, there is a universal need for ALL of us to monitor our self-care. No amount of privilege leads to an infinite amount of energy, and it’s easy to get burned out, which doesn’t do anyone good.

So what might be the benefit of this kind of analysis as we each move through the world? Again, the point is not to burden those with more privilege with guilt, nor to invoke a posture of saviorism or needing to “help” those with less privilege. Rather, this is simply an exercise that may help you gain more empathy and adjust the impact you have on others—so what we may all learn to move at the speed of care. Beyond these personal interactions, this care (extra energy) can be applied to the long-term work of dismantling inequitable systems, which in turn reduces friction and provides everyone with more energy.

Here’s an exercise you can try based on the Power/Privilege Wheel above (adapted with permission from Denise Wilmer Barreto):

Does this resonate with you?

Do you feel like you have surplus energy from a world that clears your path at the expense of other people?

If so, what will you choose to do with this power?

*It’s worth noting that being a large-bodied (tall) man carries some advantages, particularly in terms of safety as I’m less likely to be attacked in many settings than a smaller person, for example. I also wouldn’t compare the intersection of large and white to large and black, given the bias of fear against black men that’s embedded in our culture. Still I own this as a marginalized identity because I regularly experience bias, negative attention, fearful reactions (someone spending energy on fear doesn’t count as care for me), discomfort and reduced options for romantic relationships for my larger size. In a follow-up to her original post, Sylvia Duckworth said, “I realize that a slim body size is seen as more advantageous for women than for men.” In my experience, the men who have the most power tend to have athletic builds. The kind of physical power that I gain from being larger than many people is not the kind of power I want to rule the world any more than it already does.

**There are numerous identities we could add, such as attractiveness (which certainly relates to other identities as we assign more value to some features than others). Sylvia Duckworth also mentions religion as an intentional omission “because the power structure of this category varies tremendously from country to country but it should definitely be included in the conversation.”