The Other Woke* - Awake

“Woke” was first used in 1940 and began to be used in African American communities as the term, “stay woke,” about 2014.  “Stay Woke” advised alertness to negative police activities involving members of communities of color (i.e., black people, indigenous people, and other people of color).

Over time “Woke” expanded to include perceived and real injustices throughout communities of color. Then one tragic event - captured on video and broadcast globally – documented the slow death of a black man under the knee of a police officer. This powerful image stirred strong emotions beyond the black community and even beyond other communities of color. “Black Lives Matter (BLM)”, a movement born after the 2016 police shooting resulting in the death of Michael Brown, viscerally captured the deadly effects of the misperceptions and the incivility toward black communities.

Responding to BLM’s leadership, white people began to ask questions and focus attention on the lives of people living in communities of color. Are systemic injustices against people of color real? Many found that the answer is, “yes.”

The historical roots of the mistreatment of people of color go back to the earliest days of European settlement in North America. For indigenous people it began with the systematic and often violent encroachment on and removal from their traditional homelands. For African heritage people it began with their forced migration and enslavement as early as 1619 to provide free labor for creation of wealth in North America.

To keep African heritage people enslaved, white people invented a version of reality that justified dehumanizing other human beings. This included a belief system and propaganda that African heritage people are incapable of learning trades or professions; they need to be cared for by white people; they are not fully human; they are unfit to be part of society. For centuries these beliefs were not questioned. They were reinforced and woven into the cultural fabric of American life to create powerful misconceptions of people of color. 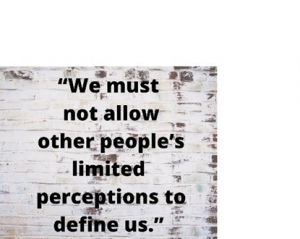 These misconceptions—these lies—must be recognized and corrected. People must Wake Up to these lies and how they conflict with Biblical and American foundational assertions of human dignity and equality.

To shift our longstanding personal beliefs, we must acknowledge the source of the beliefs. If those beliefs were handed down through the generations from people we trust, then we must challenge those beliefs. The challenge can best be met by getting closer to the stories through trusted friends, clergy, and others—especially your Woke friends and people of color.  Uprooting misconceptions in our personal beliefs cannot be achieved by changes in the law alone—it cannot be simply achieved by government edict or Constitutional amendment. It has not been done by law. This level of change in our personal outlooks and behaviors can only be accomplished by helping one another see all people—and especially people of color in their true light as full, capable members of the human family.

If you want to change and/or help a friend to Wake Up to these false narratives, TiBA is committed to providing information resources to you and your friend. TiBA will continue to help the efforts to correct misconceptions—to end racial division, racial injustice, and incivility.

*Woke (/ ˈwoʊk / WOHK) is a political term originating in the United States referring to a perceived awareness of issues concerning social justice and racial justice. It derives from the African-American Vernacular English expression "stay woke", whose grammatical aspect refers to a continuing awareness of these issues.

*Woke (/ ˈwoʊk / WOHK) aware, especially of social problems such as racism and inequality (It is a term originating in the United States.)

Perspectives for Waking Up

Best single source for history of slavery in North America and how the misconceptions of people of color have persisted: The Long Shadow on DVD, Amazon is the best price.

For a comprehensive explanation of how enslaved people were oppressed to create  private wealth in the U.S., click here.

26 charts that show how systemic racism is in the US (businessinsider.com)

Coming to the Table, https://comingtothetable.org

Why Dr. Voigt Wrote This?

WHY I focus on Understanding Prejudice about “Others”

I have the learning and experiences of 2 very distinct careers, Business and Adult Education. In each of those careers, I retrospectively, became aware that we rarely question WHY we feel as we do toward “others.”

The knowledge acquired by formal education in classrooms and the informal education in Business and Life, is only part of any person’s total knowledge. Unfortunately, a powerful part of our knowledge is rarely questioned. That part is WHY we feel the way we do about “others.” I observed in my global travels that it is a universal phenomenon that some people just accept what persons with strong opinions say about “others.”

That is WHY I focus on understanding prejudices against “others.” We must form our own beliefs based on facts about human nature to inform our views of “others.”