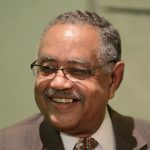 Van became a Board member of TiBA in 2019. He is committed to racial justice and unity, and involved with several other like-minded organizations in the north suburbs of Chicago. He is a native of Greensboro, NC, graduating from NC Agricultural & Technical State University with a BS in Architectural Engineering. He was involved in the sit-ins of the 1960’s to remove barriers of segregation in the United States.

During his 37 years of federal civilian service, he served as the Director of Equal Employment Opportunity (EEO) where he represented Navy Department EEO Directors for the Northeast of the US and Europe. He was presented with the Civilian Meritorious Award and Metal by the US Navy Department for his outstanding service.

Mr. Gilmer is a renown soloist, composer, and director, and the original organizer and Music Director at the Bahá’í House of Worship for the North American Continent, located in Wilmette, IL. He has travelled and performed extensively throughout Europe, the United States, Ethiopia, and the Caribbean and has appeared twice at Carnegie Hall. He is the recipient of the Independent Music Award’s “Best Gospel Song” for 2005. Van is a member of the American Society of Choral Directors and is listed in the Who’s Who Registry & Global Network for Outstanding Professionals.